By Barbara Frank and Amanda Jaffe-Katz 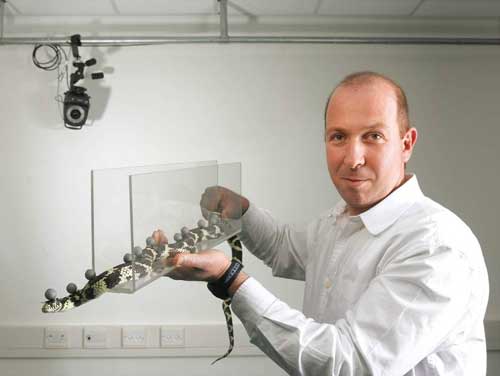 Prof. Alon Wolf with one of his snakes at the lab

Urban search and rescue (USAR); medical robotics; sports medicine and sports  training; video games, animation, and film: These far-reaching applications are all addressed by the research of new recruit to the Faculty of Mechanical Engineering, Prof. Alon Wolf, in his Biorobotics and Biomechanics Lab (BRML).

Bio-inspired robots-those that resemble living creatures-include snake robots such as those currently being explored by Wolf. These flexible robots are able, for example, to enter collapsed buildings for USAR operations, to perform duct maintenance or jet engine inspection, to serve in military applications and in minimally invasive surgery. As demonstrations on pigs have shown, snake robots can reach the heart. Wolf is part of a 5-year NIH (National Institutes of Health) program at the University of Pittsburgh School of Medicine, where he holds an adjunct appointment. “By the end of 2008,” he says, “there should be a human trial with the snake robot.”

Snake robots can go places that other remote-controlled autonomous devices cannot. The need for USAR robots was first recognized in 1985 after the Mexico City earthquake, but it was only at the World Trade Center site in the aftermath of 9/11 that robots were actually used. One of the lessons learned from that experience, Wolf says, was that, “conventional robots are too bulky to gather the requisite information and are almost useless in such terrains.” The hyper-redundant robots are tailored to such tasks; they can “look around the corner” and deliver information in a minimally invasive manner. “We take theory into practice,” Wolf says. “The challenge is not just to build but to control–user interface is also a big issue.” The operator controls the robot with a joystick, attempting to mimic the actual motions that snakes make. These vary from concertinalike motion to serpentine wiggles.

Wolf aims to develop better snake  robots tailored to military requests. He is developing a technique to  help construct such robots, which entail many challenges. To this end, Wolf studies real snakes in his biomechanics lab, measuring their means of locomotion. A regular “visitor” to the lab is the California King Snake. In its original habitat, this snake eats rattlesnake; in Israel, it will strangle a viper then suck it up like spaghetti. “In a confined space, the snake can’t make the typical serpentine movement but has a more concertina-like action,” Wolf explains. “It constricts itself, freezes, and then pulls in its tail.”

Aristotle (~300 BCE) was the first to investigate human movement. “It’s very complex and not as simple as it looks,” says Wolf of this burgeoning field known as biomechanics. This encompasses how the body moves and the action of external and internal forces on the living body, especially the skeletal system.

The BRML is equipped with a VICON system, including eight cameras positioned around the room, two video cameras, and two sensitive plates on the floor that measure applied forces, plus a wireless 16-channel EMG system to measure electric signals to the muscles. 3-D tracking data are obtained with the help of off-the-shelf reflective markers, infrared recording, the high-speed, high-resolution cameras, and a mathematical program to process the data. “The system arrived during the war last summer, so there was a delay getting it set up and tested,” Wolf says. “Ours is the only one of this model in Israel.” “The infrared camera system works like GPS to locate the reflector, and we’ve already built a model to identify movement. In addition, we employ wireless EMG for measuring electrical charge created by muscle activity at a choice of 16 different locations. We experiment with healthy individuals and also less healthy ones-those with joint problems and so forth,” Wolf says.