Granular crystals also known as nonlinear acoustic granular meta-materials are the assembly of discrete solid elements (rigid bodies) of various shapes arranged in a regular lattice structure (Figure 1). These elements are initially in contact and interact one with another through a highly nonlinear, repulsive contact force. Recent studies in the area have indicated that granular crystals possess the unique dynamical properties manifested in efficient mitigation of shock waves as well as strong localization, entrapment, and disintegration of propagating stress waves.
One among the many important and challenging goals of mechanical engineering is the development of effective tools for protection of different mechanical (e.g. vehicles, aircrafts, machine tools, rotors etc.) and micro-electromechanical systems (MEMS) from various types of external loading. In particular, protection of structures from the loading under impact or contact explosion is among the main challenges in the modern design. As it is evident from the latest research, granular crystals may serve as rather effective shock absorbers. For example granular bed is used for the dampening of explosions in explosive chambers as it may effectively mitigate the shock waves from the chamber walls. 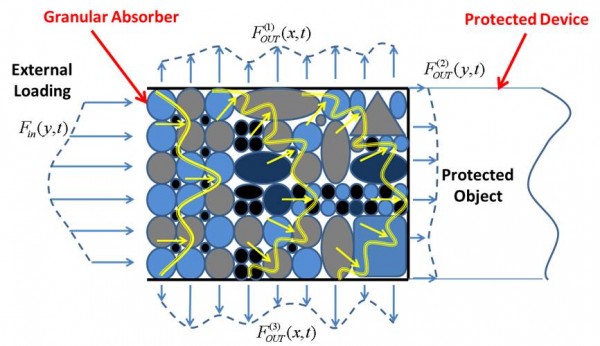 Granular shock protectors also have a huge potential to be efficiently exploited for various military purposes, as they demonstrate fairly promising capabilities for effective energy redistribution and absorption.
Our recent studies of the dynamics of granular crystals demonstrated that variation of the certain mechanical properties of the elements in the structure such as material properties (Young Modulus, Poisson Ratios, etc.) as well as geometrical ones (shapes, sizes, etc.), lead to the drastic changes in the response of the material. Thus, the response of heterogeneous granular crystals may range from the propagation of a special type of hardly attenuated, strongly localized pulses (solitary-like waves) and up to the efficiently mitigated and spatially dispersed shock waves.
As of today, there is a lack of valid theoretical models adequately predicting the dynamical response of a broad class of heterogeneous granular crystals.
Thus, in scope of the current research avenues pursued by the group of Dr. Starosvetsky Yuli  the novel theoretical methodologies are developed for the description of mechanisms of mitigation, absorption and control of shock waves propagating through the heterogeneous granular structure. Based on the theoretical findings the most efficient mechanisms of shock mitigation will be exploited in formulation of advanced strategies for the design and manufacturing of the new state-of-the-art adaptive materials with enhanced control properties.