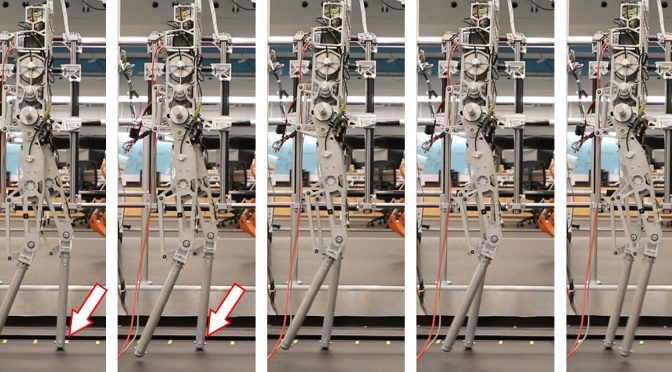 Development of legged robots capable of autonomous locomotion is an important challenge in robotics research and engineering communities. Such robots can be utilized for various applications that require motion across rough unstructured terrains, such as agriculture, defense, security, rehabilitation and assistance. Borrowing inspiration from impressive legged locomotion capabilities of humans and animals, major part of ongoing research focuses on dynamic walking. In such motion, the body does not maintain static equilibrium but constantly falls forward until a free foot makes contact with the ground through impact, followed by swinging of the other feet, and so forth. The main technological and scientific difficulty is in deriving methods for feedback control of the periodic motion of dynamic walking based on real-time sensor measurements, in order to maintain stability of the motion under disturbances or varying conditions.

A key factor that poses major challenges in stability of dynamic walking is slippery surface with limited friction, which may lead to slippage of the feet during contact. Even though many legged animals can successfully negotiate slippery surfaces, most of legged robots often fail to do so. The main reason is the feedback control methods which are based on theoretical models assuming that the feet make stationary contact with the ground, while ignoring friction limitation and the possibility of slippage.

In previous works in the research team of Associate Professor Yizhar Or, numerical simulations have been conducted for simple theoretical models of dynamic walking models which account for friction limitations and incorporate stick-slip contact transitions in continuous-time motion and in impacts. In a visit at California Institute of Technology (Caltech) as part of sabbatical leave, Prof. Or conducted collaboration with the research laboratory headed by Professor Aaron Ames. The jointly supervised PhD student Wen-Loong Ma have extended existing methods of nonlinear control and trajectory planning of bipedal walking in order to account for friction and slippage.

The methods have been demonstrated by conducting controlled motion experiments on AMBER planar biped robot that has knee joints and five actuated degrees-of freedom, walking on a moving treadmill. After applying lubricating oil at the treadmill’s belt in order to create a slippery surface, walking under Caltech’s original control method consistently failed within few steps. On the other hand, the newly developed control method that accounts for friction and slippage has succeeded in generating stable walking motion, showing robustness under a wide range of treadmill’s speeds and levels of lubrication (including non-lubricated rough surface). Results of the joint research have been published as a scientific paper (LINK) and video movie in Proceedings of IEEE Conference on Robotics and Automation, which was held on May 2019 in Montreal, Canada.

The research of Prof. Or on “Hybrid dynamics of robotic systems with intermittent contacts – analysis and experiments” has recently received a 4-year research grant of The Israeli Science Foundation (ISF).