Micro- and Nano-fluidics is an emerging field of interest because of its potential to study and manipulate fluids, nanoparticles, ions and molecules in lab-on-a-chip devices. Electrokinetics, the use of DC and AC electric field to impart a force on the liquid and colloids in micro- and nano-fluidics, promises to be the microfluidic technique of choice for portable diagnostic chips. It will become increasingly important in the nano regime because of the larger surface to volume ratio. Nanofluidics is not just a scaled-down version of microfluidics, but has fundamental differences with new forces at play. In particular, when the cross section dimensions of the nanochannel approach those of the electric Debye layer (EDL) (~10-100 nm), overlapping of opposite wall EDLs result in its ion-permselective properties. This effect can be exploited for various innovative applications such as electro-chemical-mechanical energy conversion, ion separation, desalination etc. Furthermore, combining micro- and nano-channels with biomolecules and nanoparticles allows development of innovative healthcare diagnosis devices. As an example, introduction of geometrical asymmetry to a nanochannel (figure) results in a diode-like ionic current rectification effect. Being able to build nanofluidic electronic circuit equivalents (e.g. diode, transistor) to manipulate ions (as well as macro-ions e.g. DNAs, proteins etc.) may open new paths for ion and biomolecular diagnosis miniaturized devices. More details on other research projects such as: lab-on-a-chip dielectrophoretic platform for single cell analysis, bioparticle concentrator, nanochannel arrays etc. can be found in the laboratory websit. 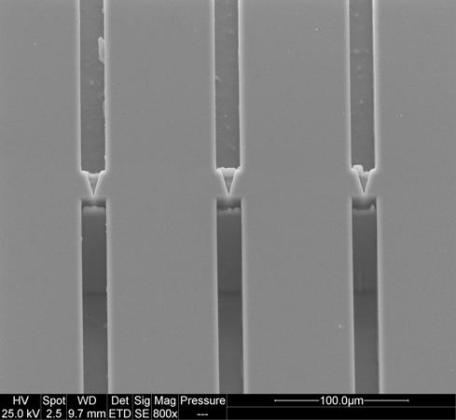