A walker for children with disabilities, a robot that helps the elderly, a device to reduce forearm tremors in patients with Parkinson’s disease, a dedicated load release device for submarines, an auxiliary device for lifting and inserting rebars in buildings

The Technion Faculty of Mechanical Engineering presented 18 new projects at its annual Design Expo. The exhibition featured projects developed by (fourth year) students at the faculty, in cooperation with the Faculty of Industrial Engineering and Management. The three outstanding teams won prizes awarded by Technion Vice President Prof. Moshe Sidi. 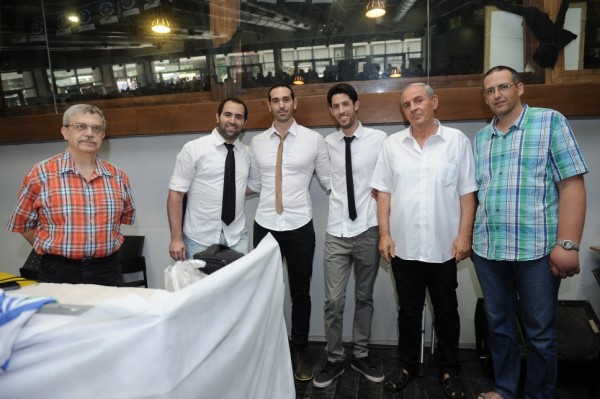 First prize went to students Ziv Sela, Dror Avitan and Oron Shinar, who built a dedicated load release device for a tiny submarine, under the guidance of Giora Gorali. The device is designed for the discharging a load from an autonomous submarine developed at the Technion. The load, which is placed in a defined location on the seabed, can be used for various purposes. The student project included a stabilization system for the load on the ground and an emission chamber including doors, buoyancy tanks and more. “The main problem was the balance of the submarine after launching the load,” explains student Ziv Sela, “and this required a lot of investment and complicated calculations.”

Second prize was won by students Guy Dahan, Dor Haddad and Rafael Tebeka, for the development of a device for lifting rebars and inserting them into a mold of hoops before pouring concrete, under the guidance of Dr. Zvi Fruchter. The device is designed to replace the construction workers who lift and insert the long heavy rebars used for reinforcing concrete. “Today, it takes two or three laborers to do the job,” said Dor Haddad, “and the goal of the project was to relieve them of the load. The planning was carried out in accordance with requirements defined by Hod Assaf Industries Ltd, and I believe that the device will be used by the company.” 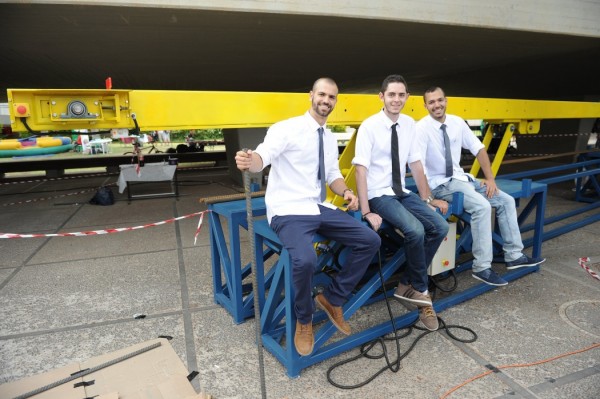 Third prize was awarded for a device for practicing walking, intended for children with motor disabilities and developed by students Tom Beatty, Eli Filashtinski and Alex Shishko, under the guidance of Kfir Cohen and in cooperation with Ofakim School in Haifa. The device, intended for children with motor disabilities at a various functional levels, enables them to practice walking movements while bearing maximum weight on their lower limbs. The device moves the child from a lying-down position to a standing position and, for children with low motor functioning, it can simulate actual walking, thereby teaching the body what walking is and which muscles it should use. The device will be used at Ofakim School. 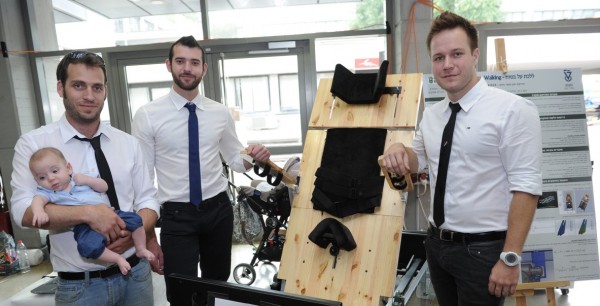 Another interesting project revealed at the exhibition was the TELE-CARE robot, a robot for assisting independent senior citizens who live at home. (The project is a joint project of the Faculty of Mechanical Engineering and the Faculty of Computer Science). “The robot enables the operator to communicate with the elder, with the tablet mounted on the robot serving as his eyes and ears.” Student Sergei Botner related, “in the future, the robot will enable the doctor to maintain daily contact with the elder at home, to make sure everything is all right with him, take his blood pressure remotely and remind him to take his pills.”

Other projects on display included a device for relief of forearm tremors in patients with Parkinson’s disease by means of a unique stainless steel bracelet; a glass temperature-measuring device; a wing spreading device and, of course, the third Formula One car manufactured at the Technion for the FSAE Championship in Italy. The car is designed and manufactured by a team of 57 students, led by student Evgeny Guy. This year many innovations have been introduced in the car, including a helmet that displays the data right before the driver’s eyes (like the display on fighter planes), a 15% reduction in the vehicle’s weight, improved aerodynamics and an acceleration sensor combined with a gyroscope. 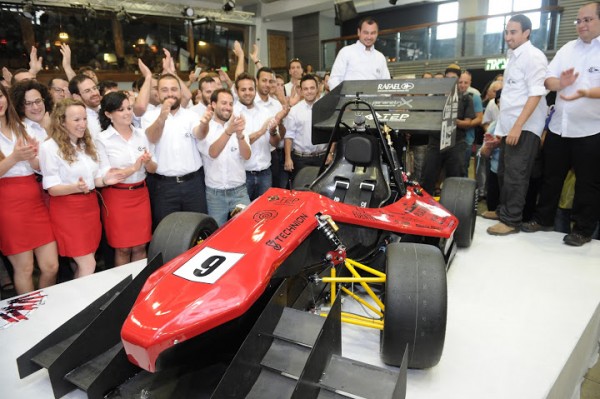 “The students went through a process of product development from the initial concept stage to its realization and presentation at the exhibition,” said Dr. Hagay Bamberger, who teaches the course. “There is nothing more exciting than exhibiting something that you made yourself, and the students learned a lot during the process. After much deliberation, we decided to award the first prize to the members of the team that developed the dedicated load release device for a tiny submarine, because they dealt with complex technical challenges and with requirements that changed during the course of the project, and they eventually developed a product that included original solutions.”

The event was also attended by Senior Vice President Prof. Moshe Sidi and Dean of the Faculty of Mechanical Engineering Prof. Yoram Halevy. Prof. Sidi said at the event that “this multidisciplinary cooperation is also excellent preparation for the real world, where multidisciplinary cooperation is essential in almost every sector. One day, when you supervise the management of a major project of national importance, or when work hard on the development of a product that will totally change the lives of millions, remember where it all began.” 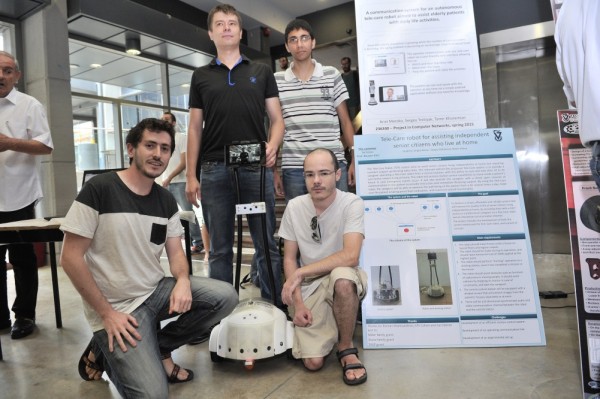